It is hard to tell whether this new Commission – in structure, process and people – will be a new beginning. President Juncker claims that “form will follow function” and that the new structure caters directly to his top priorities with Vice Presidents on the Energy Union, Digital Single Market, Jobs and Growth, and the Monetary Union (including the Euro and Social Dialogue portfolio). The new Vice Presidents for Better Regulation and Budget give him an inner sanctum of six VP’s overseeing the portfolios of the other twenty Commissioners (in addition to the High Representative who will also serve as a VP).

The President, in his speech to the press, indicated that no policy will be able to come out of a single Directorate-General (DG – the main units within the Commission that separate Commissioners competences) without approval of the Vice President covering that area. While the organigram provided by the Commission attempts to slot DGs fit under VPs, one can expect this to be fluid position. This is presumably intentional as certain issues may bring portfolio Commissioners under different Vice Presidents at different times. Some Commissioner-VP combinations seem awkward – such as DG for Climate Action and Energy (Spain, Cañete) under an Energy Union VP (Slovenia, Bratušek). Others remain hard to discern such as Health and Food Safety (Lithuania, Andriukaitis) and which Vice President would coordinate work in this area, if at all.

One thing that is evident, is that the President wanted heavyweights in the VP slots – four of the seven are Ex-Prime Ministers although with varying years of experience. Such individuals, used to leading roles, will create a strong central core for the new Commission. It is also interesting to note that not one single large EU country, outside of Italy, has a Vice President slot. It will be interesting to see if large country Commissioners such as Moscovici (France, Economic Affairs) or Hill (UK, Financial Affairs) will bristle under the “coordinating” hand of Vice Presidents. In this case, being an Ex-Prime Minister counted for much more than being from a large EU country.

The President was not without his surprises – the largest being the fact that the UK was given the Financial Stability, Financial Services and Capital Markets DG. This is clearly a show of favour to the UK since one of Juncker’s stated priorities is to deal with the threat of a “Brexit” and should reassure the City following the traumatic years of Barnier. However, one could argue that the days of needing a UK Commissioner in this post are gone, with much of the legislation (40+ pieces) already passed under the old Parliament. Another surprise is DG Trade, where Sweden’s Malmström, an Ex-Commissioner for Humanitarian Aid, will take up the position. With little past experience on trade matters and given the sensitivity around TTIP, is this appointment a signal that TTIP is being downgraded as an issue?

There will some interesting mini-configurations at work on some of the most crucial areas. In the area of growth and jobs, Katainen (VP, Finland, Jobs and Growth) will be working with Moscovici (Economic Affairs, France), Thyssen (Employment, Belgium), and presumably Dombrovskis (VP, Latvia, Euro and Social Dialogue). There is the Energy Union with Bratušek (VP, Slovenia, Energy Union) working with Cañete (Spain, Climate Action and Energy) and Vella (Malta, Environment).

The President certainly ticked all the politically correct boxes – of the nine women three are VPs (Georgieva, BG; Mogherini, IT; Bratušek, Slovenia) with three others holding critical portfolios – Malmström (SW) in Trade, Jourová (CZ) in Justice and Vestager (DK) in Competition. Small countries were awarded key portfolios and there was a balanced East – West mix. This should help with the upcoming hearings in the European Parliament.

One of the interesting dynamics will be the “old school – new East” styles in the Commission. Juncker is clearly seen as an old school fixer but he will be sharing management with the four Ex- Prime Minister VPs who come from Latvia, Finland, Lithuania and Slovenia. It is not hard to imagine a charging core of VPs creating a friction with the “old school” Commissioners.

The next test will be the EP hearings. Invariably some Commissioners will flounder in the arena with a good possibility of the Parliament demanding a retraction of at least one Commissioner designate. Expect Katainen to get a rough reception from the ECON Committee with Finland’s austerity position clearly in the mind of the MEPs, including Chair of the Committee Gualtieri (IT). Hill (UK) will also have a tough time with sceptical MEPs unsure of how he will treat financial service regulation given his past lobbying jobs. One of the most interesting points to look out for during the hearings is how Commissioner – designates respond to the questions of far right and far left parties.

There is little doubt that this Commission is a step up in terms of the calibre of the candidates. Juncker made this clear in his speech yesterday. There is also a direct intention to focus central power through VPs, although Juncker was diplomatic enough to indicate that Commissioners with direct portfolios will not be “reporting” to VPs. The press has noted that the senior positions are Commissioners most aligned politically to Juncker’s centre-right views. With the VPs having a coordinating role across portfolios, inter-service consultation (the process by which all relevant DGs put in remarks to the lead DG on a policy or Directive) should be more focused and accelerated. One of the distinct powers held presumably by VPs is their power to broker opinions between DGs and therefore be in the position to decide the most burning questions.

A new dawn for the Commission? Probably not. The institutional legacy is too great, the economic crisis is not nearly as acute as in 2008, and the consensual decision making system in Brussels mitigates against revolution. However, President Juncker has played a strong hand and his structure and candidates play well towards a more focused and dynamic approach to policymaking. In fact, he may have been granted a team which goes against all his old-school instincts and actually surprises us all. 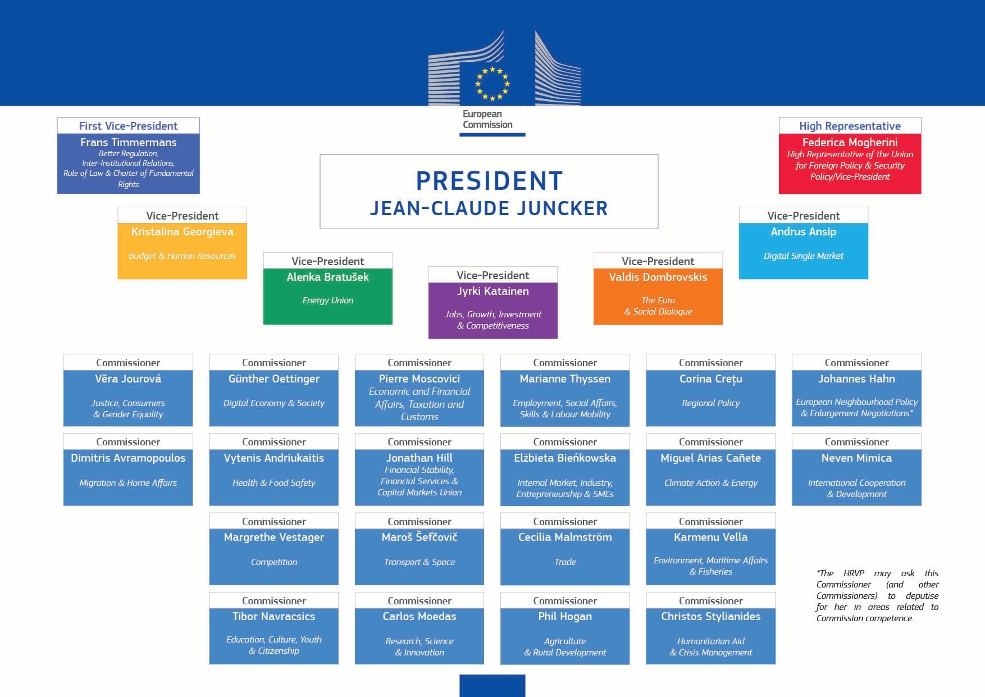